Line integrals in a scalar field give the area under a space curve. The formula can be generalized for more variables.

The gradient is the vector of the partial derivatives of a function with respect to each of its variables. 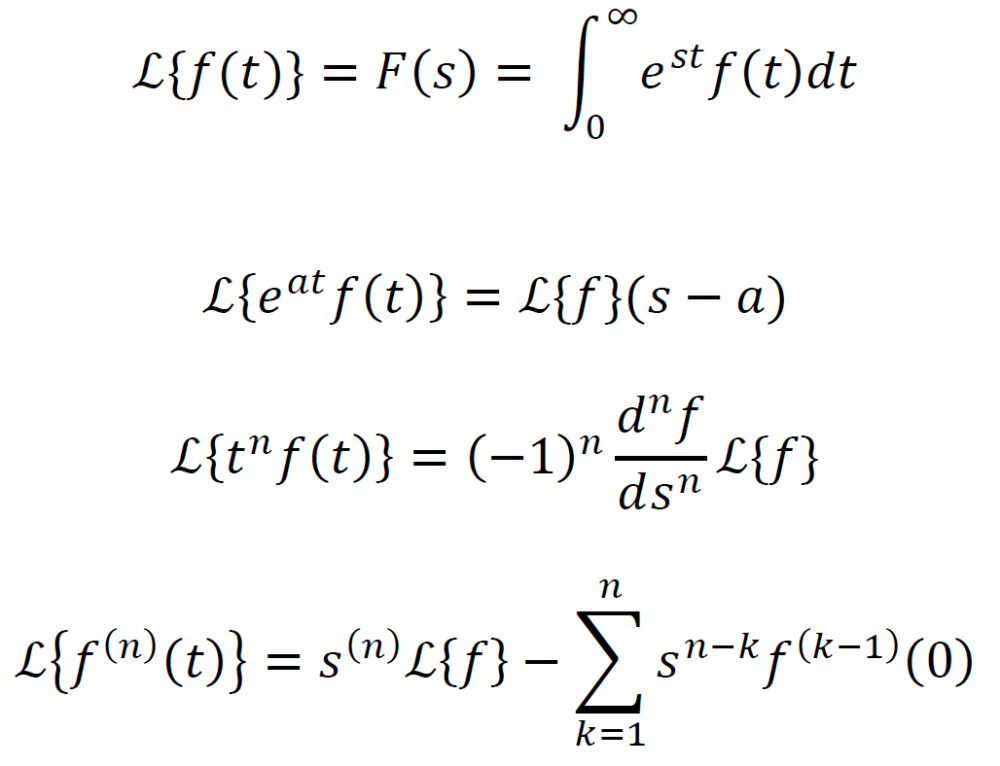 Euler’s identity relates e, i, and ϴ to trigonometric functions.

Complex integrals are also called contour integrals. Integrals of complex functions can be expressed in terms of line integrals if f(z) is continuous on a parameterized space curve.

In complex analysis, residues come from a generalized (to complex numbers) version of Taylor series called Laurent series. They are useful in evaluating contour integrals. If the complex part of a Laurent series contains a finite number of terms, then z = z0 is called a pole of order n. Here, n is the power to which (z – z0) is raised in the denominator of that term in the given Laurent series. If n=1, the pole is called a simple pole and can be computed by the formulas at top or middle. For higher order poles, the formula at bottom can compute the residue.

Cauchy’s residue theorem requires a simply connected domain D with a closed contour C inside and a function f(z) which is differentiable on and within C except at a finite number of points z1, z2, … zn. If these conditions are met then, the contour integral of f(z) may be computed by the equation below.

The handshaking lemma states that, for any graph G(V,E), the sum of the node degrees equals twice the number of edges.

The transpose of any matrix is applied as in the example below.

The determinant of a 2×2 matrix is given by the equation below. 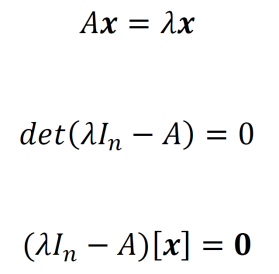 Fourier series are weighted sums of sines and cosines that can represent any periodic signal. Here, the period of signal s is given by T.

The Fourier series coefficients are the weights of the sines and cosines. They are given by the integrals below.

The continuous Fourier transform takes in a signal function s(t) and decomposes it into its component weighted sines and cosines. It employs the relationship between complex numbers, sines, and cosines to achieve this. Fourier transforms are said to convert from the time domain to the frequency domain. By observing the frequency domain, a signal can be more easily analyzed and decoded.

Since the output of a Fourier transform is usually complex, the equation below can be used to convert the output to a power spectrum.

The discrete Fourier transform has the same purpose as the continuous version, but it operates on discrete data s(k) and so uses summation rather than integration.

Power spectra can also be computed for discrete Fourier transforms. 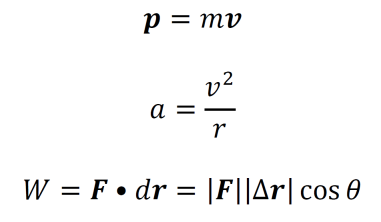 Newton’s second law in terms of mass and acceleration (top) and in terms of momentum (bottom). Force is measured in Newtons.

Velocity of an object undergoing circular motion given its period.

Force from potential energy in 3D. 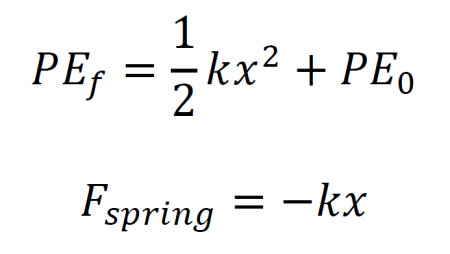 Energy of isolated system with thermal energy U.

Multidimensional power with constant force. Power is measured in J/s.

Multidimensional work with variable force (given by a vector field) as a line integral.

Suppose that a constellation of point charges exists at a given time. If a new charge, q0 is brought into the vicinity of the other charges and placed at a location x,y,z, then the force from the other charges on q0 is given by the equation below. The ȓ0j represents a unit vector extending from qj to the point x,y,z. The ϵ0 represents a constant known as the permittivity of free space and is equal to 8.85•10-12.

The electric field in the above scenario is defined as the equation below, where F has been divided by q0.

To calculate the electric field from a continuous charge distribution at a point x0,y0,z0, the triple integral below is used over the volume region D. The unit vector ȓ points from (x,y,z) to (x0,y0,z0).

The electrostatic potential energy of a point charge q brought into the vicinity of an electric field E is given by a line integral describing the work performed on the point charge to move it from position r0 to r.

Given an electrostatic potential function UE, the electric field is given by the gradient of UE.

Fick’s first law of diffusion describes the relationship between the flux J of particles across an area and the concentration of the particles. D is a proportionality constant called the diffusion coefficient. The law is given in 1D at top and in 3D at bottom. 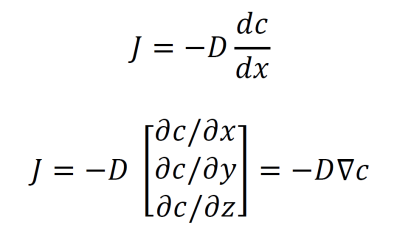 Fick’s second law of diffusion describes how particles flow given a concentration gradient. The law is given in 1D at top and in 3D at bottom. This is equivalent to the heat equation.

The Nernst equation describes the membrane voltage given an ion’s concentration on each side of the membrane. R is the gas constant (8.314 J/K), F is Faraday’s constant (96,485 C/mol), z is the charge of the ion, and T is the temperature in Kelvin.

The Goldman equation expresses the membrane voltage given multiple types of ions and relative permeabilities of the membrane to those ions.

The Nernst-Planck equation describes ion flow with electrical potential and concentration gradients. Jp indicates particle flux over an area, D is a diffusion coefficient, UE is the electrical potential, e represents the elementary charge of 1.6•10-19 C, z is the charge of the given type of ion, and u is the mobility constant of the ion in the solution.

The free energy required for an ion to cross a semipermeable membrane (like a phospholipid membrane) is given by the equation below. This equation accounts for a preexisting membrane voltage from another ion. If the free energy is negative, the ions in the first term will spontaneously cross the semipermeable membrane. Note that the numerator and denominator within the natural logarithm are switched relative to the Nernst equation.

The Rydberg equation gives the wavelength emitted when an electron moves from an excited state ni to a lower energy level nf. Here, R is the Rydberg constant, 1.097•107 m-1.

Given an electromagnetic wave, its velocity (the speed of light c), frequency, and wavelength are related by the equation below.

Particles have wavelengths known as de Broglie wavelengths. They can be computed using Planck’s constant 6.626•10-34 m2kg/s over the momentum mv.

The energy of a wave (in J) is given by the formulas below. Note that frequency is equivalent to c/λ.

The integral of the wavefunction squared denotes the probability that a particle will be found within a given region. Since wavefunctions may be complex, the square must be computed using the complex conjugate. This is the 1D version of the equation.

The average or expectation value of a measurable property (associated with an operator) is given in 1D and 3D by the integrals below. Note that the integral in the denominator acts to normalize the result.

The time-dependent Schrödinger equation describes the evolution of a wavefunction over time.

The general solution to the time-dependent Schrödinger equation is the time-independent wavefunction times a complex exponential.

Consider the spikes of a single neuron being recorded over a time interval t. This experiment is carried out for K trials. The firing rate v in trial k is given by the number of spikes over t. Repeating the experiment several times allows the repeatability of the spike count nk across repetitions to be calculated. This variability, the Fano Factor, is the variance of the spike count over the mean spike count.

The Hodgkin-Huxley equations are a system of differential equations that model neural electrophysiology. The system must be solved numerically. The C(dv/dt) term, in which capacitance is multiplied by the change in voltage with respect to time, is equivalent to current across the membrane. Note that membrane voltage is a function of time. Eion is the equilibrium potential for that ion across the membrane, Iin is the injected current, and gion is the conductance value for that ion across the membrane. The parameters m, n, and h help describe the gating of the ion channels and fit the model to data.

Bayes theorem gives the probability of an event based on prior knowledge of other conditions that may have influence on the event.

For a discrete random variable, a probability mass function gives the probability associated with each outcome of a random experiment.

Cumulative distribution functions (CDFs) give the probability that a random variable X will give a value less than or equal to x.

For a continuous random variable, the integral of a probability density function fX gives the probability that the outcome lies on the chosen interval.

Given a set of n total elements, a permutation is a selection of k elements from the set such that the order does matter. The number of permutations of a set is given below.

Given a set of n total elements, a combination is a selection of k elements from the set such that the order does not matter. The number of combinations of a set is given below.

Shannon information is a measure of “surprise” associated with an outcome. The units are bits and p(x) is the probability of the given outcome.

Entropy is the average amount of Shannon information from a stochastic data source.

Conditional entropy is the entropy of X given that a particular outcome y (from the other variable) is known.

Mutual information measures the mutual dependence of two random variables. It does not necessarily imply causality, though sometimes it is associated with causality. The mutual information I(X;Y) is given by the sum of individual entropies minus the joint entropy.

Electrical current is defined as the amount of charge in Coulombs that flows through a conductor or circuit element per unit time. The Coulomb is a unit of charge that is equivalent to 1.602•1019 elementary charges. One electron has a charge of -1.602•10-19 C. Current is measured in amperes, which are C/s. Voltage is defined as the amount of energy per unit charge that moves through a given circuit element. It is measured in J/C or volts. Voltage can be thought of as electrical potential energy. Resistance has units of V/A or ohms, represented by Ω. Current, voltage, and resistance are related by Ohm’s law (top). Conductance refers to the inverse of resistance, is represented by G, and is measured in inverse ohms Ω-1 or siemens S. Ohm’s law in terms of conductance is given at bottom.

Power is the rate of energy transfer in J/s or watts. Power is given by the product of current and voltage.

Energy delivered to a circuit element is computed by integrating power over a time interval.

If the length L of a resistor is much larger than its cross sectional area A, then the resistance can be approximated by the formula below. The letter ρ is a constant for the material of the given resistor called the resistivity. The resistivity is measured in ohm meters Ωm.

Resistances in parallel can be converted into a single equivalent resistance using the equation below.

The equation for conductance in series is given below.

The equation for conductance in parallel is given below. 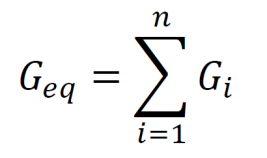 The capacitance for a parallel plate capacitor, measured in Farads (coulombs per volt), is given by the equation below. Here, ε is the dielectric constant for the material between the plates, A is measured in square meters, and d is measured in meters.