These notes will cover the basics of Lagrangian mechanics and Hamiltonian mechanics using linear oscillatory motion as a lens (including coupled oscillations). I will assume that the reader already has knowledge of Newtonian mechanics at the level of a typical introductory physics course. That said, these notes are targeted towards readers who want to apply mechanics in engineering disciplines. I will not go much into derivations or at all into proofs, but rather present mechanics as a tool for solving engineering problems.

Although Newtonian mechanics is useful in many situations, there exist many mechanical systems for which Newtonian methods are difficult to apply. One way of circumventing a cumbersome Newtonian problem is to utilize the Lagrangian method instead.

Lagrange’s method centers around a quantity known as the Lagrangian L. This quantity is equal to the system’s kinetic energy T minus the system’s potential energy V (see the first expression below). The Lagrangian is needed for a differential equation called the Euler-Lagrange equation (see the second expression below). Here, q represents the generalized coordinates of the system. The concept of generalized coordinates will be explained subsequently. As one example, q could equal the one-dimensional position x of a free particle. When the Euler-Lagrange equation is simplified, it reduces to a differential equation that describes the motion of the desired system. Solving that differential equation gives the equations of motion for the system.

To further illustrate how to apply the Euler-Lagrange equation, consider the system of the fixed spring linked to a mass. The following series of equations shows how to find the differential equation describing this system. Recall that the kinetic energy of a moving mass is 0.5mv2 and the potential energy of a spring is 0.5kx2. 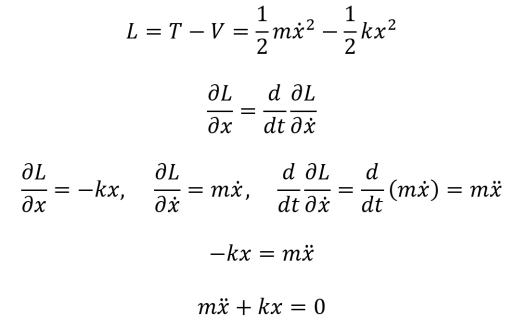 Simple harmonic motion (SHM) is an important type of oscillation which happens when the acceleration of a mass is linearly proportional to its displacement from an equilibrium position and is directed towards the equilibrium position. In SHM, there is no loss of energy. SHM in 1D is mathematically described by the following differential equation. Some examples of SHM include the oscillations of simple springs and pendulums. For a simple spring system, ω2 = k/m. For a simple pendulum system, ω2 = g/L. (The constant ω is the angular frequency).

There are several equivalent ways of writing the solution to the SHM differential equation, each of which has benefits and drawbacks. The exponential solution to the SHM equation is the first expression given below. The sine and cosine solutions arise by using Euler’s formula eiωt = cos(t) + isin(t) and are given by the second expression below. B1 is the initial position and ωB2 is the initial velocity.

Another equivalent way of writing the solution to the SHM equation is to use the phase-shifted cosine solution. The phase-shifted cosine solution is given as the first equation below. Here, A is a constant describing the amplitude of the oscillations. The constant A can also be computed using the constants B1 and B2 which were described above. Finally, the solution to the SHM equation can be written as the real part of a complex exponential. This version of the solution is given by the second equation below.

One useful special case to consider is when a driving force of the form f(t) = f0cos(ωt) is applied. In this case, f0 is the amplitude of the driving force divided by the oscillator’s mass and ω is the driving force’s frequency. Note that ω is a distinct parameter from the oscillation frequency ω0. The differential equation for this system and its general solution are given below. Note that the non-cosine term in the expression for x(t) is the homogenous solution. Because this non-cosine term decays over time, it only contributes to the waveform during the early stages of the oscillations.

Resonance can be further characterized by computing the maximum amplitude Amax of oscillations where ω = ω0. This quantity is given by the following equation.

Finally, it can be useful to note that the phase shift at resonance is π/2. The reason for this is that ω02 – ω2 = 0 at resonance and the equation for the phase shift is arctan(2βω/( ω02 – ω2)). The zero in the denominator results in an arctangent of infinity, which equals π/2.

To understand coupled linear oscillations, it is often helpful to consider the case of two masses linked by springs that are fixed to walls as seen in the image below. Here, m1 and m2 refer to the masses and k1, k2, k3 are the spring constants.

This system can be solved by Newtonian or Lagrangian methods. Here, the Lagrangian approach will be employed. Recall that the Lagrangian L = T – V. The kinetic energy T is found as the sum of the kinetic energies of the masses as shown in the first equation below. The potential energy V requires carefully evaluating the extensions of the springs. In this system, the respective extensions of the three springs are x1, x2 – x1, and –x2. Using this information and Hooke’s law Fs = –kx, the potential energy is given by the second equation below. The Lagrangian L is given by the third equation below.

Solutions to this system of equations can be written in the complex form as seen below. Here, p1 and p2 are arbitrary constants and the actual motions of the masses are determined by Re(z(t)). Note that, although the frequency ω is assumed to be the same for z1(t) and z2(t), there are actually two solutions for ω (this will be explained subsequently).

By substituting the above equation into the matrix equation for the coupled oscillator system, the following eigenvalue equation for K can be obtained.

The general solution for the case of two masses linked by springs system is given as follows. The vectors are the eigenvectors from the eigenvalue equation of K. Note that this solution is a linear combination of the two normal mode solutions. As usual, the constants A1, A2, δ1, and δ2 are determined by initial conditions.

Going beyond the case of the two masses linked by springs, for a similar system with N coupled masses, there are N normal frequencies and the equation of motion for each mass consists of superpositions of N normal modes. This principle also extends to other types of oscillators such as coupled pendulums.

The Hamiltonian and Hamilton’s equations

Hamilton’s equations use the Hamiltonian to derive equations of motion for a system. By contrast to the Euler-Lagrange method which reduces a system with n degrees of freedom to n second-order differential equations, Hamilton’s method instead reduces a system to 2n first-order differential equations, which can sometimes be advantageous. Note that degrees of freedom are the number of independent parameters needed to define the state of a system. For many systems, the degrees of freedom are equal to the number of generalized coordinates (when this is the case, the system is called holonomic). Hamilton’s equations for i = 1, 2, 3… n are given as follows.

The results of Hamilton’s equations can be combined with each other to produce the equations of motion for a given system.

As an example of how to apply Hamilton’s equations, consider the system of two masses linked by three springs with fixed walls at the edges (see the image in the previous section). For this system, the Hamiltonian is equivalent to the total energy as H = T + V (since the only generalized coordinate is x, which is already a Cartesian coordinate and so does not depend on time to undergo conversion to Cartesian coordinates). The Hamiltonian is given by the first equation below. Hamilton’s equations and their results are given by the second, third, and fourth lines of the equations below. Recall that the derivative of momentum is equivalent to force.

An advantage of the Hamiltonian method over the Newtonian and Lagrangian methods is that Hamilton’s equations are even more flexible than the Euler-Lagrange equation when it comes to coordinate changes. Under certain conditions, changes of both generalized coordinates and generalized momenta of the forms Q(q,p) and P(q,p), preserve the validity of Hamilton’s equations (with respect to the new coordinates and momenta). When these changes preserve the validity of Hamilton’s equations, the changes are called canonical transformations. But as mentioned, canonical transformations only work under certain conditions. The conditions for a transformation to be canonical are given by the equations below. The subscripts denote variables which must be held constant for the formulas in parentheses.

The Hamiltonian method and phase space

Another advantage of the Hamiltonian method over the Lagrangian method is that Hamilton’s equations are automatically of the form dz/dt = h(z). There are many mathematical tools available for working with differential equations of this form. One of the most important of these tools is phase space analysis.

In Hamiltonian mechanics, the phase space vector is a 2n-dimensional vector z(q,p) where q is all of the generalized coordinates and p is all of the generalized momenta. Each value of z identifies a unique set of initial conditions for the system. With this notation, the equation h(z) is an expression of Hamilton’s equations as a first-order differential equation. Here, h is a vector of the functions fi = ∂H/∂pi and gi = –∂H/∂qi.

Trajectories in the phase space with axes given by the elements of z(q,p) are vital in Hamiltonian mechanics. Any point z0 at a time t0 defines a unique trajectory in phase space of z. Since phase space vectors have 2n elements, it is difficult to visualize phase space for systems with more than one generalized coordinate, though there are methods to aid such visualization.

It is important to note that, for a given point in phase space, only a single trajectory can pass through that point across all times t. If there appear to be two trajectories crossing the same point, the trajectories must represent the same path looping back on itself. This property follows from Hamilton’s equations.

As an example of a phase space trajectory, consider the one-dimensional harmonic oscillator. For this system, the Hamiltonian is H = T + V = p2/2m + 0.5mω2x2 where k = mω2. Hamilton’s equations give ẋ = ∂H/∂p = p/m and ṗ = ∂H/∂p = –mω2x. By differentiating ẋ to get ṗ/m, the equation of motion for the system is found as ẍ = –ω2x. The solution to this equation of motion is x = Acos(ωt – δ). As a result, the momentum of the system is given by p = mẋ = –mωAsin(ωt – δ). These expressions for x and p act as parametric equations that define phase space trajectories. The phase space trajectories for this system take the form of ellipses which each start from unique phase points (p,x) and which never cross over each other. Different values of A determine the unique trajectories. 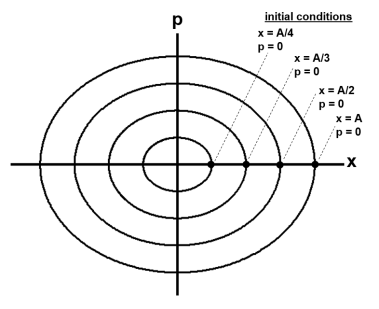